Fruit of the Spirit: Longsuffering

a revel, carousal; a nocturnal and riotous procession of half drunken and frolicsome fellows who after supper parade through the streets with torches and music in honour of Bacchus or some other deity, and sing and play before houses of male and female friends; hence used generally of feasts and drinking parties that are protracted till late at night and indulge in revelry.

The komos was a particular and specific kind of Greek “observance” of which we know only a little based on what is attested in paintings on vases and in glimpses in Greek literature. The most famous komos is only known from its aftereffects: Alcibiades crashes the Symposium narrated by Plato after he participated in a komos. The komos certainly involved drunkenness; those participating in it, the komoi, would also engage in a kind of procession in the town in an immodest and indecent way. Weddings seemed to feature a komos, as would certain city festivals. Masks seem to be worn for at least some observances of the komos; there might well have been competitive speeches or songs involved. The Greek term for comedy, komoidia, quite likely derives from the word komos and ode, song: it is not hard to imagine the mirth and vulgarity of drunken song leading to what would become the tropes of what is now deemed comedy.

We thus can understand why both Paul and Peter will condemn the komos as a behavior of the Gentiles (using the term with its pejorative connotation), the rites of the darkness which are not suitable for Christians who live and walk as if it is daytime (Romans 13:13, 1 Peter 4:3-4).

Many cultures have a komos-type ritual, or at least provide some opportunity for its members to participate in a similar form of revelry and carousing. What Paul and Peter condemn in the Greek komos is easily found in eerily similar modern contexts: the drunken wedding party, the drunken feasts celebrating an important day for a given nation or people, the orgy of revelry and even violent destruction of property when a city’s sports team wins a championship (or, in some instances, loses one). The spirit of revelry can often be found in a bar or tavern. Not a few songs have been composed in a drunken haze among friends; what passes for comedy continues to rely on the vulgar tropes of what was likely discussed among the komoi in the ancient Greek world.

Perhaps the fullest modern embodiment of the komos is the stereotypical college frat party. Excessive amounts of alcohol are drunk; hazing rituals often feature stupid behaviors harming the one being hazed, innocent people, and property; young women are invited, plied with plenty of alcohol, and sexual behaviors with varying levels of consent and awareness naturally follow. This is all seen as “good fun,” and many who participate in it yearn to do so again soon. The prevalence of this trope in the modern psyche betrays the strong desire among many who should have outgrown such things to be able to return to them.

Let none be deceived: nothing good can come from revelry and carousing. It is one thing to celebrate important rituals in a person’s life and in the collective life of a nation or a culture in modest and sober ways. It is quite another to commemorate such things with revelry and carousing; such behavior is haunted by the drunkenness, sexual immorality, and violence that define the experience. How many high quality decisions have been made while drunk? How many unwise sexual liaisons have begun while drunk in a context of revelry which have led to pain and frustration long afterward? And that presumes such sexual liaisons are consensual, however one can define “consensual” in a drunken revelrous context; how many cases of sexual harassment, sexual assault, and/or rape have taken place during such parties? How many awake the day after such revelry with a splitting headache and deep regret? Why would people yearn to participate in such things again, and consider such behaviors as part of the “joys” of youth?

A hedonistically minded culture which normalizes and encourages such bouts of revelry is demonic in inspiration, casting a strong delusion over its people. As Christians we must set aside such delusions and turn away from the “party lifestyle.” Christians ought to be sober-minded, not enraptured by alcohol and sexual desire. Christians understand why revelry takes place at night: it is a work of darkness exposed as shameful in the light of day. Christians do well to be of the daytime, cognizant of the dangers of revelry, avoiding the works of the flesh, glorifying God in Christ in all they think, feel, say, and do. The shared love of Christians in Christ provides far greater connection and camaraderie than any drinking party can offer; the relational unity Christians ought to experience in God and with one another makes a mockery of the pretenses of a bacchanal. May we find joy and celebration in God in Christ, and obtain eternal life in Him!

Sounds like they expect the church to be....the church.

In which we appreciate the majesty of standing before God, Jesus, the angels, and the saints. https://t.co/7yg6jswRXH
View on Twitter
0
1

When one's theological understanding shifts with the vicissitudes of current events, it's clear that politics drives theology, rather than the other way around.

aka it has become idolatrous. https://t.co/z6i0rYMGw3
View on Twitter 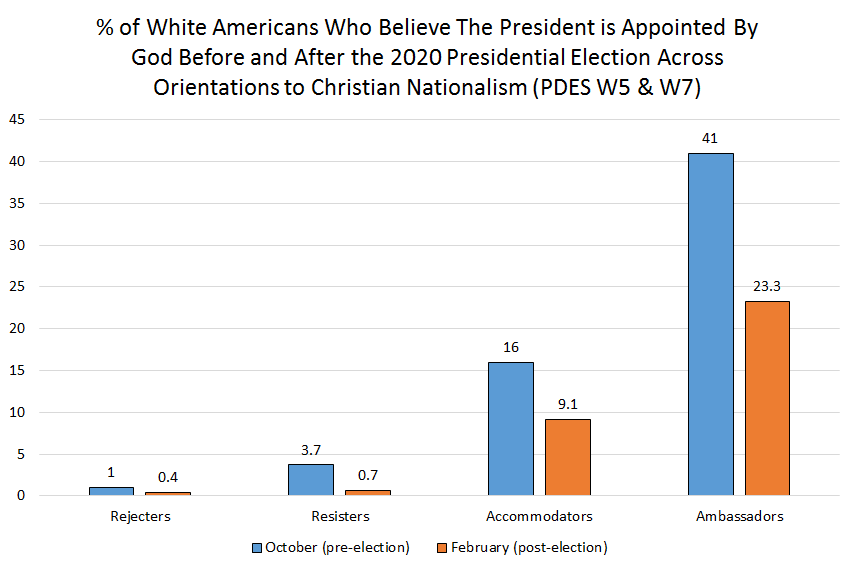 Samuel Perry @socofthesacred
What a difference a few months can make in one's theology! We asked THE SAME Americans before & after the 2020 election whether they think God appoints the President. In October, 41% of Ambassadors agreed. By February only 23% of *those same adults* agreed.

4 of 5 stars to Hebrews by James W. Thompson https://t.co/DQ6ZfjLqlh
View on Twitter
0
0

5 of 5 stars to The Epistle to the Hebrews by F.F. Bruce https://t.co/lZVF6QhWyi
View on Twitter
0
0
Follow @deverbovitae