Daniel foresaw great travail for Israel at the hands of the “king of the north,” a Macedonian king of the Seleucid Empire, a terrible beast (Daniel 11:10-45). Israel would understand what Daniel meant all too well in the days of Antiochus IV Epiphanes. How Israel survived those days is recounted in the apocryphal book of 1 Maccabees.

1 Maccabees was preserved in Greek as part of the Septuagint; it was originally written in Hebrew, as attested by both early Christians (Origen, according to Eusebius, Ecclesiastical History 6.25.2) and Semitic peculiarities in the text. The author of 1 Maccabees is unknown; he consciously imitated the historical writings of the Old Testament, wrote primarily about events taking place between 175 and 134 BCE, and perhaps was a late contemporary. 1 Maccabees sets forth the story of Antiochus IV Epiphanes’ attempts to suppress Judaism and the ultimately successful Maccabean revolt which it prompted.

From the beginning the text was recognized as not inspired, not least by its own author (cf. 1 Maccabees 4:46); Jerome translated the text into Latin for the Vulgate but relegated it to a secondary status (later called deuterocanonical). Gradually, and only within Roman Catholicism, was 1 Maccabees inserted into the Old Testament and held to be inspired. Even though it is not inspired, 1 Maccabees is an important witness of a time in which many of Daniel’s prophecies were fulfilled and of great importance for understanding the beliefs and perspectives of Jews who lived in the days of Jesus toward the end of the Second Temple Period.

1 Maccabees begins by setting the scene: Alexander the Great’s victory, his death, the division of his empire, and many kings leading to Antiochus IV Epiphanes, as well as the presence of many Jews who abandoned the Law of Moses and became as Greeks (1 Maccabees 1:1-15). Antiochus’ exploits are recounted: his victory over Ptolemy in Egypt, his plundering of the Temple in Jerusalem and eventually the whole city, and his decree abolishing the observance of the Law of Moses, circumcision, the Sabbath, and the offerings (1 Maccabees 1:16-53). Antiochus also built an “abomination of desolation” on the altar, burned copies of the Law of Moses, and executed those who observed it, yet many stayed faithful to the Law (167 BCE; 1 Maccabees 1:54-64; cf. Daniel 9:24-27). 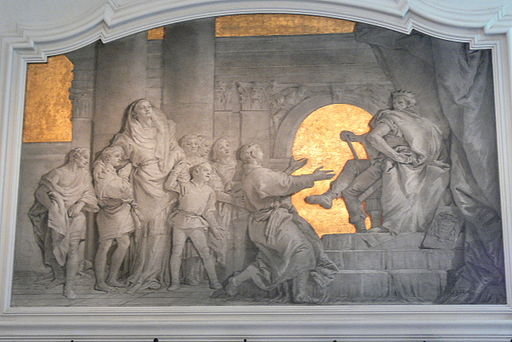 Mattathias of Modein refused to renounce the Law and killed a Jewish man who did and the king’s agent, calling all who were zealous for the Law to follow him and his sons into the desert (1 Maccabees 2:1-30). Mattathias soon died of natural causes (1 Maccabees 2:49-70); his son Judah, called the Maccabee (“Hammer”) led the insurgency against Antiochus: he defeated two army detachments, and in response Antiochus vowed to crush him, exile the Jews, and replace them (1 Maccabees 3:1-41). Judah defeated two larger armies (1 Maccabees 4:1-35); with the Seleucid forces defeated for a time, Judah and his brethren went up to Jerusalem, cleansed the Temple, and again resumed offerings before YHWH (164 BCE; 1 Maccabees 4:36-58). This rededication would be commemorated annually as Hanukkah (1 Maccabees 4:59).

The Maccabees were then attacked by neighboring nations; they split their forces among the brothers and defeated them (1 Maccabees 5:1-54). Antiochus IV Epiphanes died in Persia, Antiochus V Eupator took his place in the west, energetically resumed the assault on the Maccabees, but soon felt compelled to compromise in order to deal with a rival claimant to the throne (163 BCE; 1 Maccabees 6:1-63). Soon after Demetrius I Soter returned from Rome, apprehended and executed Antiochus V Eupator, and took over the empire; he sent forces against Judah the Maccabee which were defeated; Judah also appealed to Rome for friendship (1 Maccabees 7:1-8:32). In the next battle between Judah and Demetrius’ forces, the Maccabees were defeated and Judah was killed (160 BCE; 1 Maccabees 9:1-27); his brother Jonathan was chosen to continue to lead the insurgency, defeated the Seleucids twice, and was thus able to engineer peace in Israel for a time (1 Maccabees 9:28-73).

The rest of 1 Maccabees describes the reigns of Jonathan and Simon, concluding with Simon’s assassination by his son-in-law Ptolemy and the accession of John Hyrcanus to the throne (134 BCE; 1 Maccabees 10:1-16:24). While the Seleucids would claim Judah and Israel as part of their Empire, and sometimes attack the Maccabees, they proved too weak and internally divided to overcome the Maccabees (called Hasmoneans after Jonathan), who became legitimated as the de facto rulers of Judah.

1 Maccabees remains the primary source of the history of the Maccabean revolt; historians often dispute some of the numbers given but accept the credibility of the general recounting of events. Later historians like Josephus used 1 Maccabees as a source. 1 Maccabees is therefore of great importance, explaining how many of Daniel’s prophecies reached their fulfillment and providing background to help us understand why the Jewish people of Jesus’ day were suspicious of Roman rule and why they would think they could successfully overthrow them. Thus, while 1 Maccabees itself is apocryphal, the events it describes really happened, and those events were very much on the mind of Israelites as they listened to Jesus of Nazareth and His Apostles. God is faithful, and finds ways to deliver His people. May we ever trust in Him!