Ever since Jesus’ life, death, and resurrection passed beyond living memory, people have wondered and speculated about the life He lived before the Gospel of His ministry (in Greek, the protoevangel). Some people told stories in order to “fill in the gaps”; one such story from the second century has been preserved in what is called the Protoevangelium of James, otherwise known as the (Infancy) Gospel of James, or by its ancient title, The Birth of Mary. 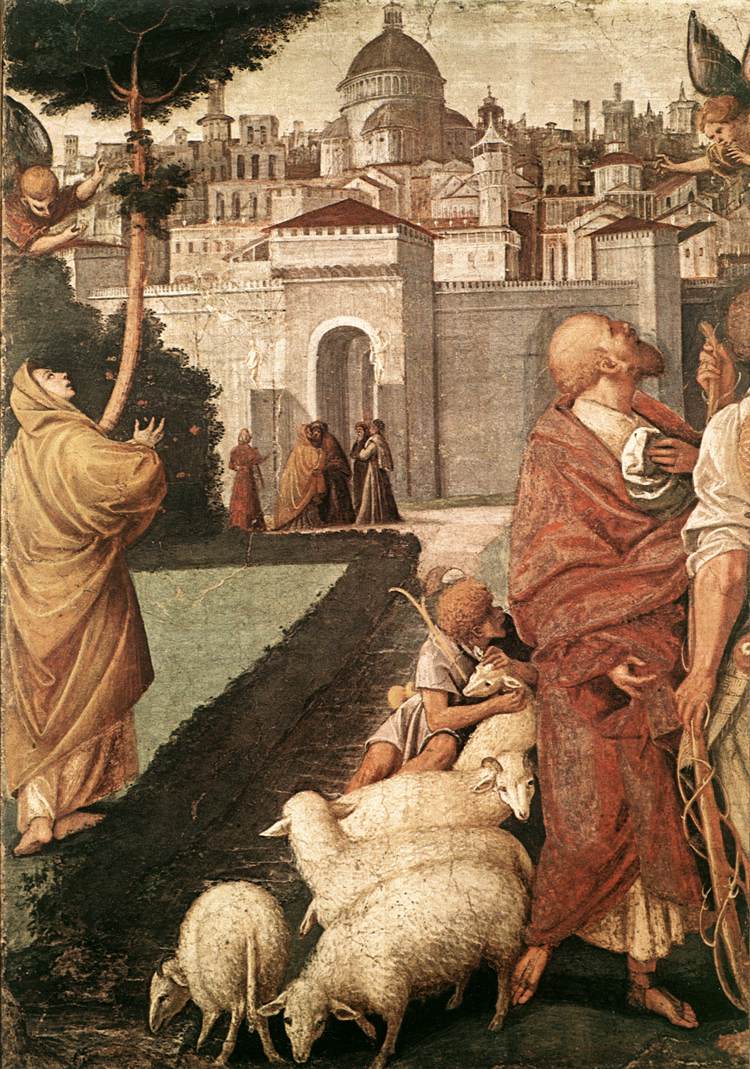 The text of the Protoevangelium of James can be accessed here. Its story is told in three sections of eight chapters each. The first section tells the story of Joachim and his wife Anna, wealthy and pious Israelites who have no children. An angel appears to them and announces they will have a child, and they vow to dedicate the child to God. Anna conceives in her old age and gives birth to Mary. According to their vow they dedicate Mary to God and she lives in the Temple from 3 until she is 12. At 12 she is to be married to the man whom God has chosen for her (Protoevangelium of James 1-8).

The second section tells the story of Mary and Joseph. Joseph is spoken of as an old man who already has children, but he is chosen by God to become Mary’s husband. He departs from her; the angel of the Lord comes to Mary and she assents to bearing the Lord. She visits Elizabeth; afterward Joseph returns, sees Mary pregnant, and laments. Joseph is accused before Annas in the Temple of defiling Mary; both he and she drunk the water of the ordeal of God, and were found blameless (Protoevangelium of James 9-16).

The third section describes the birth of Jesus. Joseph goes down to Bethlehem for the census, and Mary is in labor. A midwife is found and she helps Mary give birth. The midwife is astonished because Mary was not only a virgin before the birth but remains intact after the birth. This midwife finds Salome and invites her to come and see; Salome comes and puts her finger in to test the claim, repents of her unbelief, feels great burning in her hand, and was told by an angel to hold the child so as to be healed, and she does so. The Wise Men then come to honor the child. Herod then sends to have the children of Bethlehem killed; he also sends to have John (the Baptist) killed, but Elizabeth and John find refuge in a mountain cleft open for the purpose. Herod then has Zechariah the father of John killed at the altar of the Temple. When his body is found there was great mourning and lamentation; his blood on the ground turned to stone; the lot then fell to Simeon to serve as priest, the one who would not see death until he saw the Lord’s Christ (cf. Luke 2:25-35). The Protoevangelium of James ends with a note of attribution from James (Protoevangelium of James 17-24).

The Protoevangelium of James is most famous for its claims which would become part of Roman Catholic and Eastern Orthodox doctrine: Mary’s perpetual virginity and Jesus’ “brethren” as really step-brothers and step-sisters, children of Joseph from a previous marriage. While the Protoevangelium of James does demonstrate that such views were gaining in popularity in the second century and are quite old, they remain in conflict with what is revealed in the original four Gospels: Joseph did not “know” Mary until (after) she gave birth to Jesus (Matthew 1:25). In Matthew 13:55-56 the townspeople of Nazareth speak of Jesus as having brothers and sisters and make no distinction between them and Him in terms of parentage.

The Protoevangelium of James was not written by James and is justly not part of the New Testament. The text has historical value inasmuch as it helps us understand the speculation of early Christians about Mary and her virginity and how, in the absence of evidence from the New Testament, proponents of her perpetual virginity were compelled to invent stories so as to fill in the gaps. May we be concerned about such speculation and insist firmly on only what can be known about Jesus from what has been revealed in the Gospel (Jude 1:3)!